There is something to be said for becoming depressed over the amount of prescriptions and the number of doctor’s visits one person can be subjected to.

I am currently taking one prescription 3x a day for my PCOS.
I am taking 3 other separate prescriptions at any given point in my monthly cycle to try to help me become pregnant, or at the least help my cycle be somewhat regular.

I am also taking 2 prescriptions for my post root canal treatment recovery – once of them is 3x a day and the other is 5-6x a day.
I am also taking high dose Percocet for pain, and OTC pain meds to reduce inflammation.

In addition to this, I am seeing a Chiropractor 3x a week to treat my pinched nerve, as well as acupressure for helping fertility.

I also see my Reproductive Endocrinologist 2-3x a month to monitor my cycle.
Each time I am subjected to invasive procedures.

This is all in addition to school and 2 part-time jobs.

Wednesday night I was in intense pain and dizzy from my root canal in addition to an overly swollen left side of my face.
Yesterday, I was home all day – alone for the most part – crying and feeling very depressed. I was also extremely dizzy and nauseous (I vomited) and that left me bed ridden for the most part.
Today, my pain is less so, but the swelling is just as bad. I can hardly eat because I can barely open my mouth. I can’t lay on my left side because the slightest pressure to my left cheek hurts so much.
My dentist’s office is not returning my calls because they’re closed and I am not considered an emergency.

I had one friend offer to visit me, but I was feeling too nauseous to receive her visit.

I am not trying to complain.
I understand His grace is sufficient for me.
But if we’re being honest, sometimes it takes a concentrated effort to remember that.

I am just tired of doctors and medication I have to remember to take and feeling sick or nauseous and dizzy and otherwise not myself.

I don’t need speeches about greens smoothies or Paleo diets or any other natural things.
I believe in their efficiency, but I haven’t found them to be cures as much as preventive healthy therapy.

I don’t need monologues about “faith-based healing” because I have faith that God can heal me and relieve me of my symptoms.
I have prayer for this and God has chosen to allow me to endure these trials so that I might draw closer to Him and rely on Him for my help.

Okay, I am done venting now.

So….. exactly one month ago I turned 29.
I am currently living out my last year in my twenties – that is so strange to say!
When did I become so old?

What might have been an uneventful birthday due to a lack of planning and an overly busy summer for us and everyone else we knew, my birthday actually turned out really well! 🙂

First of all, I created an Amazon Wish List and posted it on my Facebook. When I did this, I was just feeling a bit brave and a little obnoxious, but it turns out that my friends and family actually loved the wish lists and I got lots of amazing presents because of this list! I am totally doing this every year. 🙂

I seriously got TONS of books that I really look forward to reading in the near future, plus two necklaces! Chad got me a new phone for my bday (desperately needed! haha) and I also got various cards, gift cards, and even an end table from my brother Matt and his FIANCE Anne that is designed to look like oversized books! (I’d been wanting this forever!)

Here is a pic: 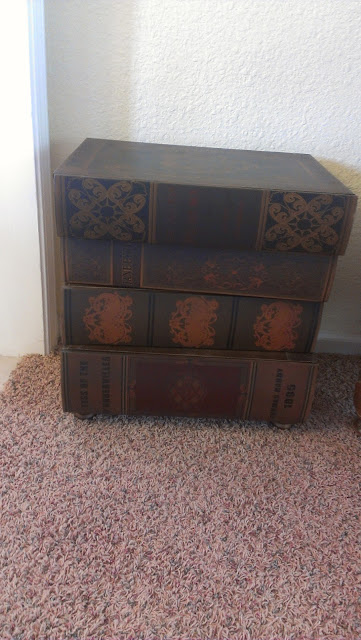 Secondly, we were out-of-town for my actual birthday in Branson, MO to celebrate four years of blissful marriage, so we had plenty of fun activities to do in Branson on my birthday!

Here are some trips from the drive down to Branson…

I tried to get Chad to just smile at me while he was driving and this is what I got… (he makes me laugh so much!): 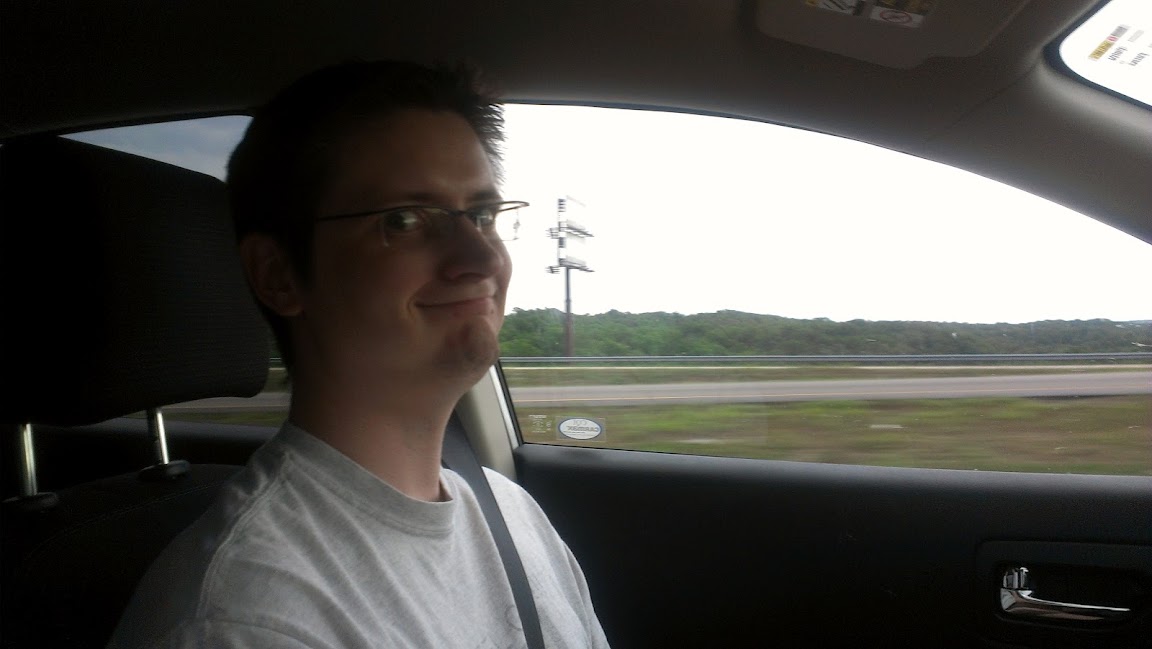 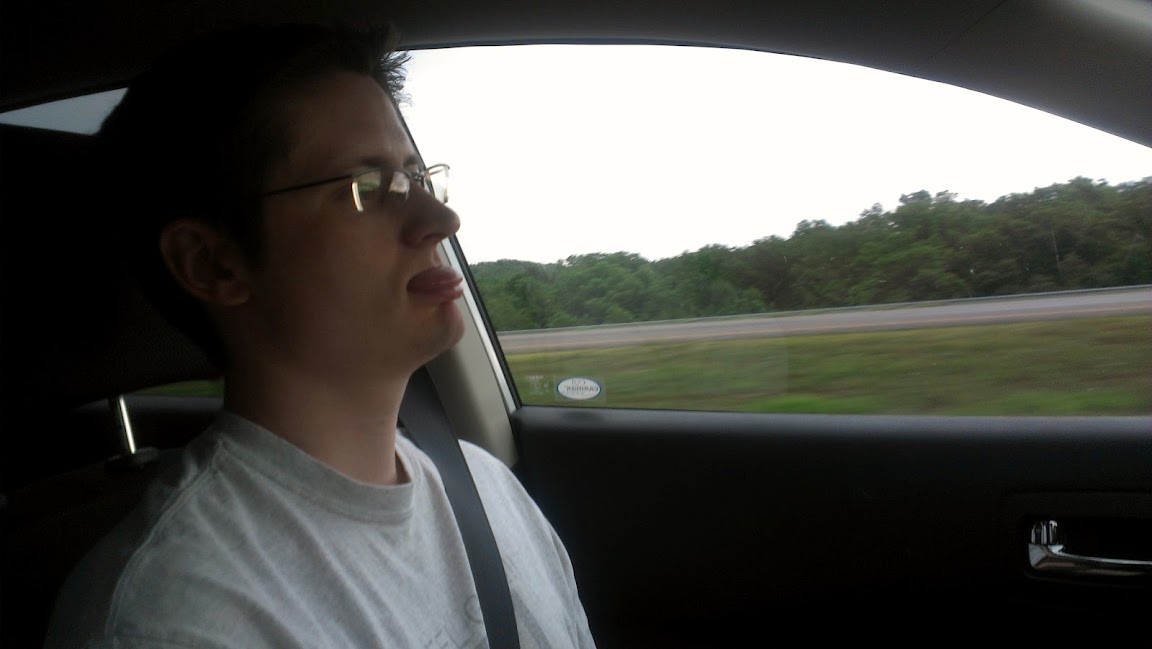 Finally, we got to our hotel, which was definitely a bargain since we were low on vacation funds, but it was mostly comfortable. 🙂 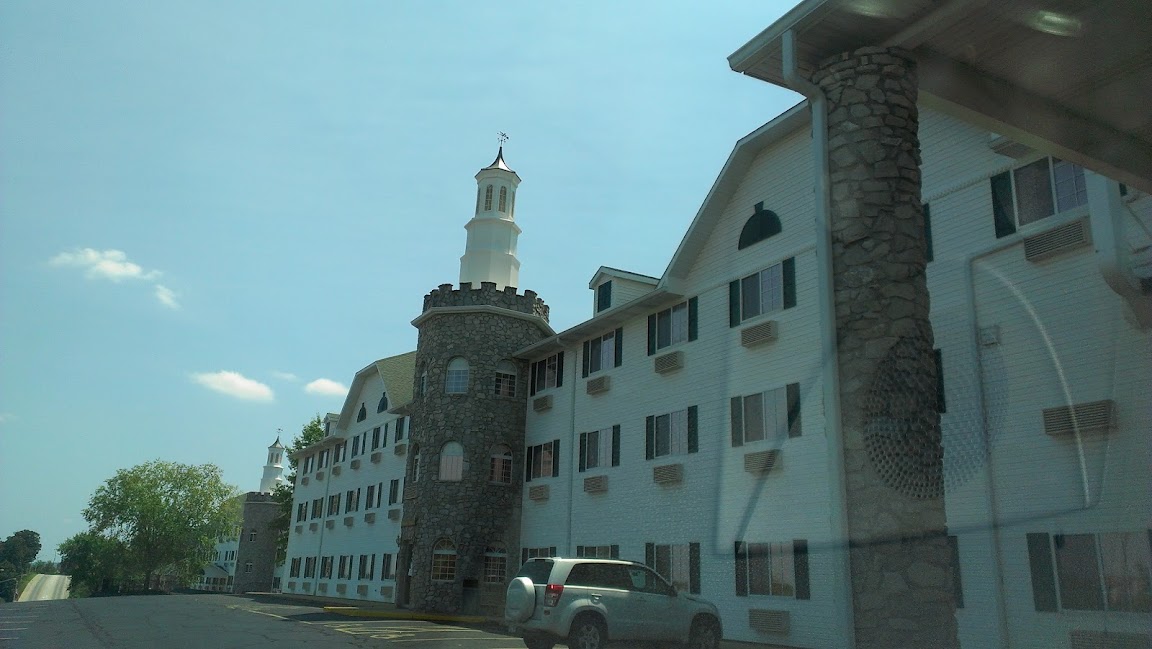 When we went out the day of my birthday, we already had mapped out what we wanted to do… We wanted to get breakfast, then see The Dark Knight Rises at the genuine Giant Screen IMAX (this ended up being a big Branson FAIL because the IMAX lost power 45 min into the movie!), and then we’d have dinner and then see this show recommended by Chad’s cousin called The Haygoods.

Let me be clear here. When Chad said that his cousin Taylor recommended “The Haygoods,” I immediately conjured up images of rednecks in overalls making music on whiskey jugs, corn cobs, and banjos!

This was THE BEST show I think we could have seen in Branson!! AND one of the best shows I have EVER seen! It was 6 siblings playing tons of songs we already knew in their own style with amazing talent, dancing, lighting effects, stunts, and so much more….Here are some pics!

They could each play several instruments and would keep jumping back and forth between different ones per song!

A lot of their instruments would light up like this!

A lot of stunts like back flips, playing on top of the piano, instruments lighting on fire, etc… 🙂

One of my favorite parts where Dominic came out and played “Unchained Melody” on the sax! So beautiful!

This was also in my top 3 favorite parts of the show…. this one guys came out and started tap dancing on top of a table….

A bunch of them came out and started tap dancing in Combat boots and street clothes!!
It seriously felt like a scene from RENT or something!! SO urban and so awesome!

Oh, and then the sister randomly starts playing the drums! She could play over 12 instruments!!

Here is a promotional video of the Haygoods show:

And another one that really gives an idea on what their shows are like, though we didn’t hear this particular song the night we went. 🙂

It was seriously the best! Chad and I were both hoarse from screaming and cheering and these were only a few pics of 100 or so pics that I took that night!
The Haygoods really helped make my birthday amazing. 🙂

The rest of Branson was spent celebrating our Anniversary with other shows, shopping, eating funnel cake sundaes, attending The Price is Right Live (Branson edition), and more. 🙂 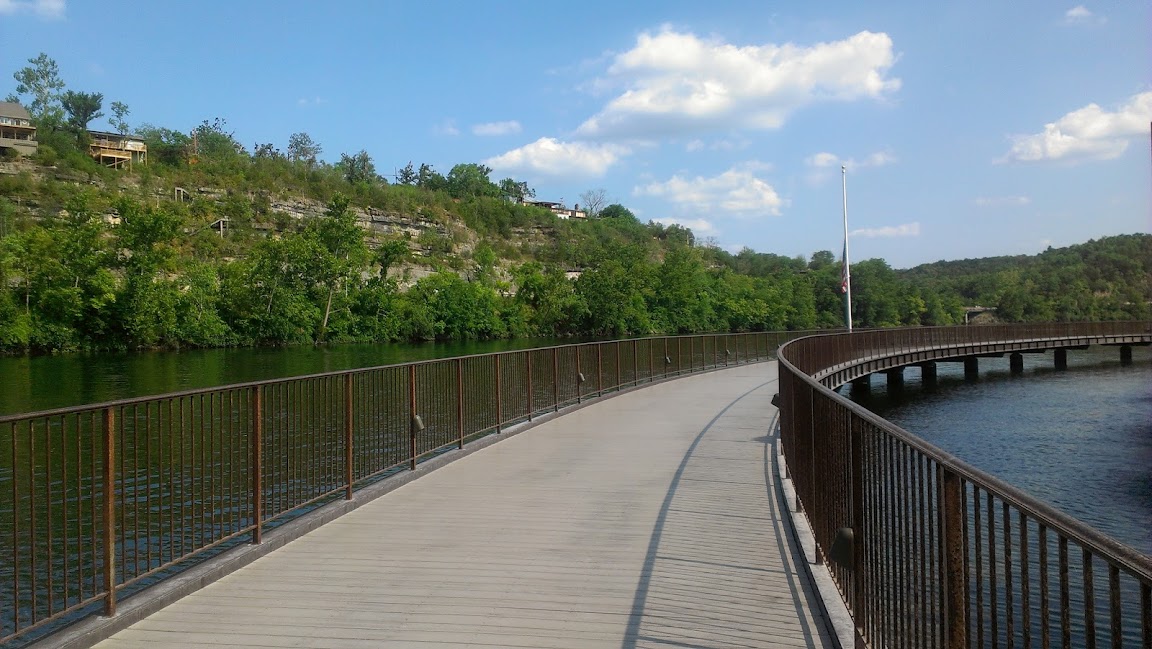 Dolly Parton had a show called “The Dixie Stampede” that is set up almost exactly like Medieval Times… There is a dinner served to you that you have to eat with your hands while you watch a show where you have to pick sides and cheer for your side… in this case it was the North vs. the South. :p

I didn’t find out until after I took this pic that you’re not supposed to take pics of this event… so that was my last pic for this. 😦 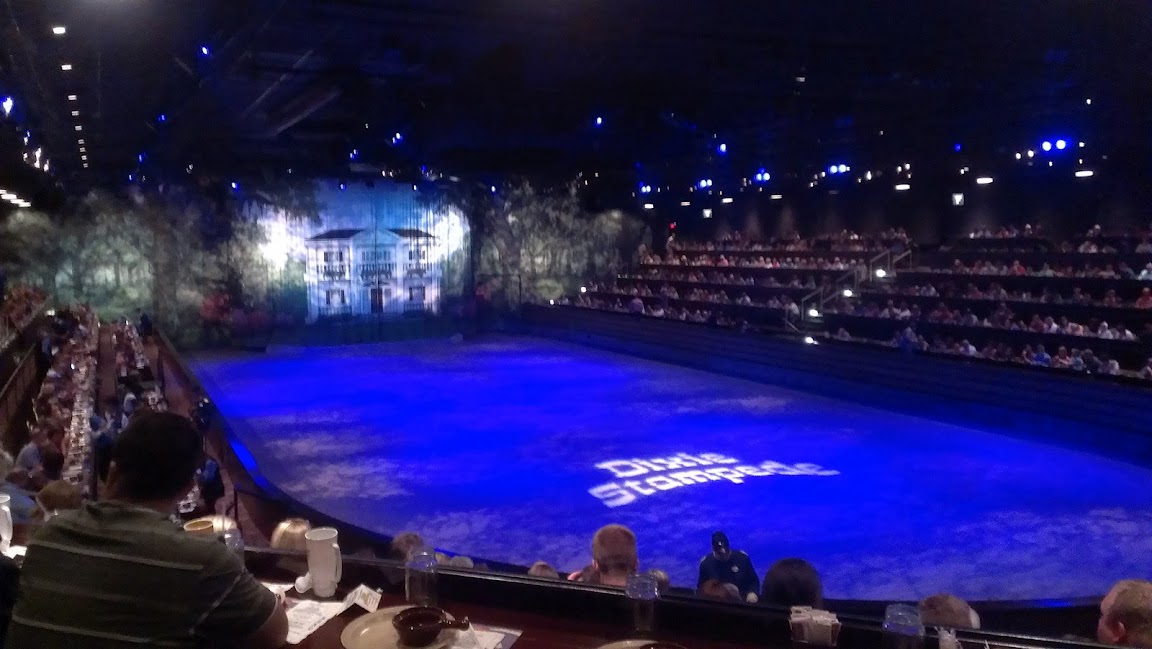 Then we decided to do this brand new thing in Branson where they have a mock set up of The Price is Right! It is a LIVE show instead of televised, but you can still win real prizes! We didn’t win anything big, but Chad’s name got called as an instant winner to be able to spin the wheel and get your picture taken with the host and ladies. Everyone else had to pay $$ if they wanted to do this! 🙂

CLICK HERE TO SEE A VIDEO OF CHAD SPINNING THE WHEEL!! 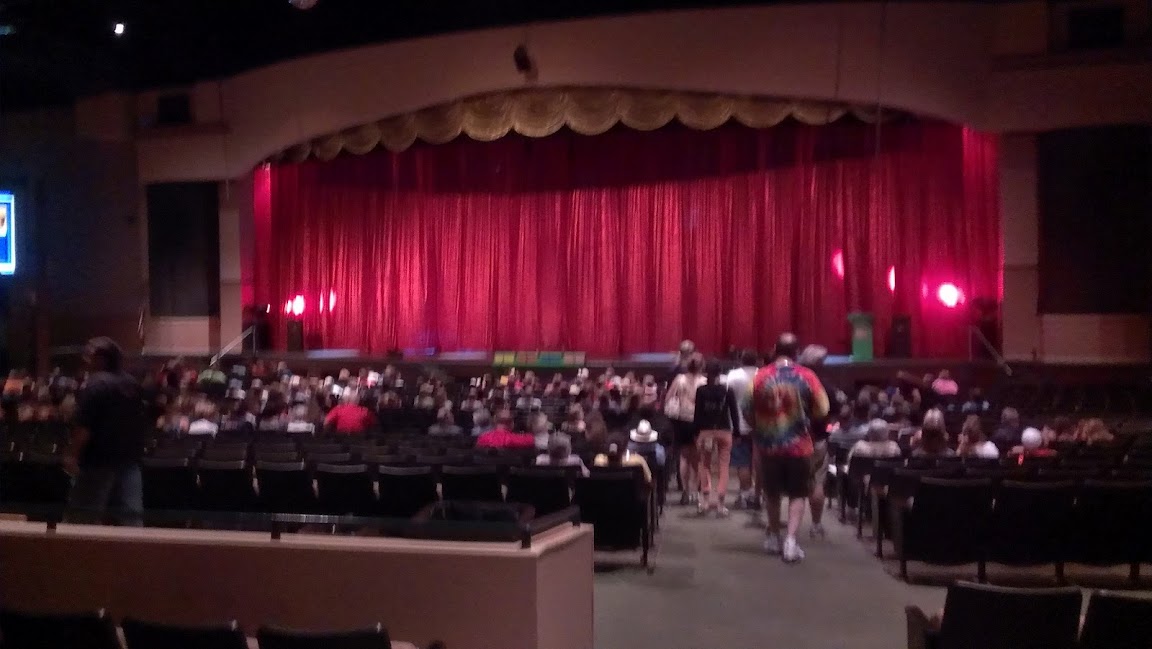 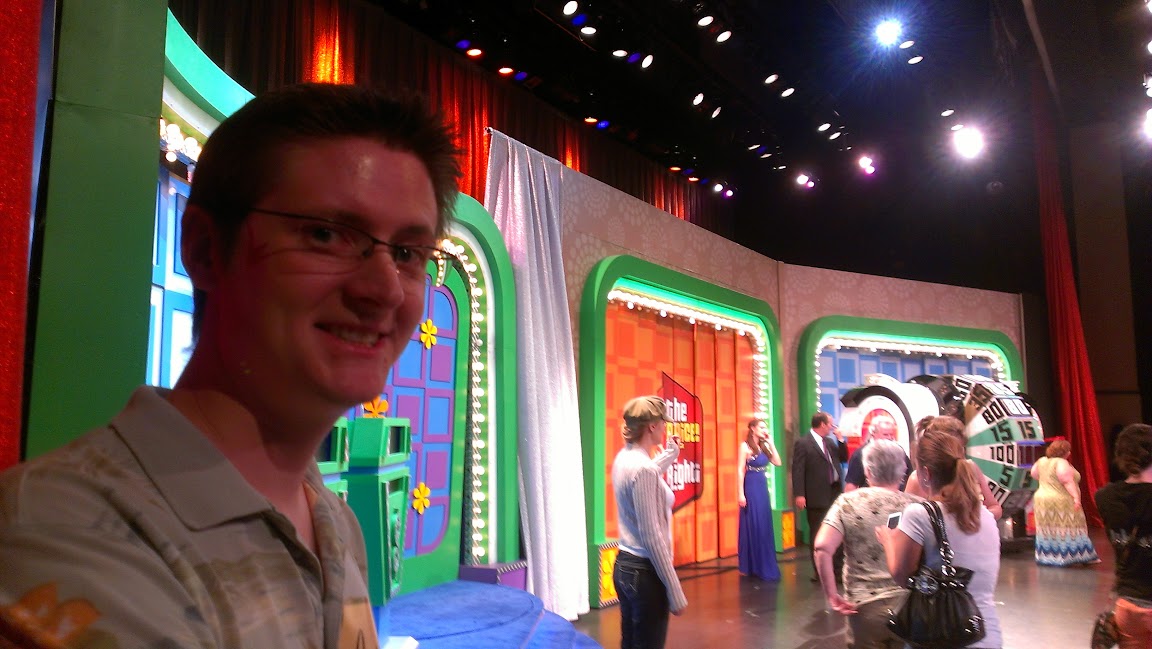 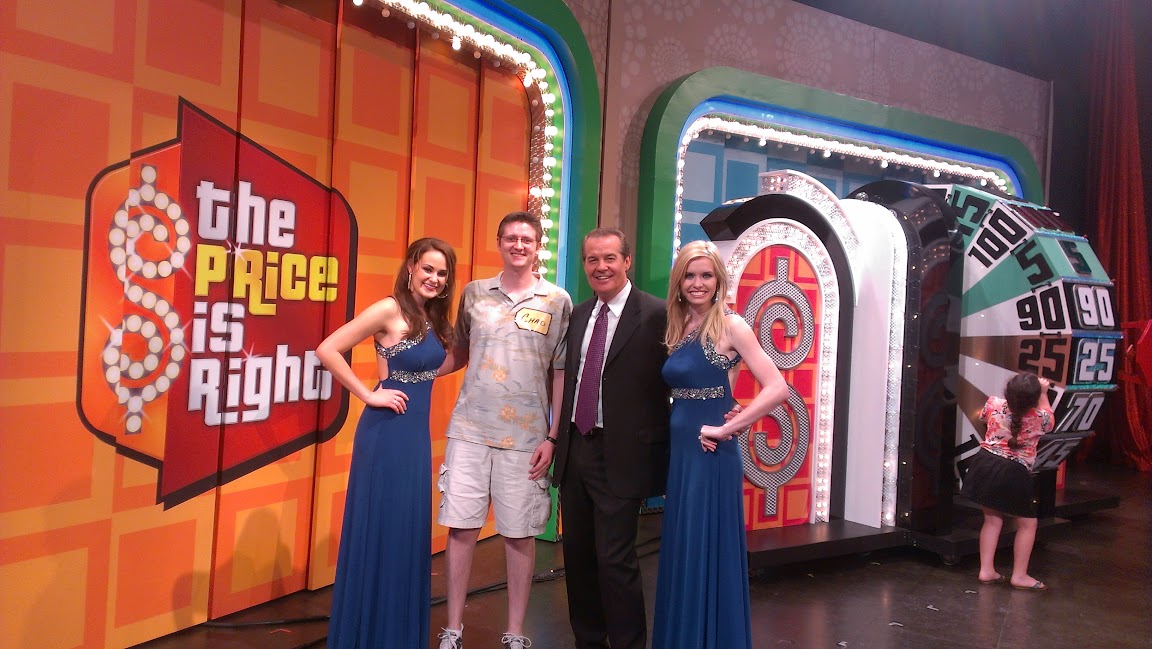 When we got back from Branson, some of my dearest friends and favorite women in Kansas City wanted to throw me a birthday get-together. We went out to eat at Ingredient and then back to Maria’s house for quality time, coffee, tiramisu, wine, chocolate pie, and more! So blessed to have these wonderful friends in my life! 🙂

The Plaza at night…

All in all, turning 29 and celebrating 4 years of marriage was wonderful! 🙂

I put together this compilation for my Granny to celebrate her 70th birthday!

YouTube has told me this video violates their copyright laws. I exercised my rights as an American citizen to dispute this claim under the Fair Use policies that amend the copyright laws, but it will probably will only protect this video for a short period of time. YouTube will most likely deny my dispute, which will cause this video to disappear in one month.

Since I am being such a rebel, line-pusher in order to bring my Granny some semblance of happiness on her birthday, you should watch this video and comment. 🙂

One a side note, while I was making this video for my Granny, my husband Chad was making THIS VIDEO and it is sooooooooooooooo weird and funny! 😉